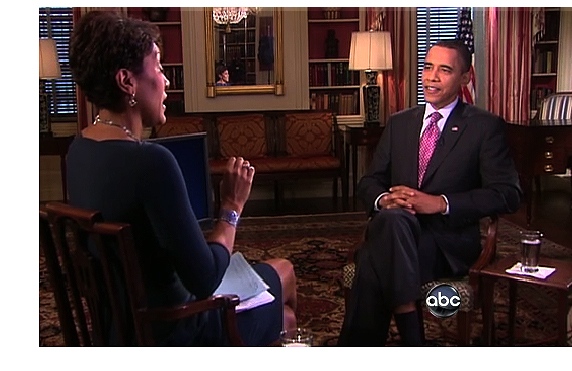 During today’s This Week, Robin Roberts had a special sit-down chat with President Barack Obama about this special day.

The president has been outspoken about his absentee father, and even an 11-year-old puts him on the hot spot asking, off-camera, “Do you miss your father on Father’s Day?” Obama’s response (according Roberts): ‘No, I do not.’

As Roberts and This Week‘s host, Christiane Amanpour, pointed out, his interview focused more on lessons he continues to learn as a father himself, and not as the son of an neglectful one. President Obama briefly lamented the approaching “storm” of the teen years of his daughters Sasha and Malia.  He said he was thankful that he has the Secret Service people as deterrence to keep away knuckleheads.

Yet, President Obama did have some kind words for his father who inspired some of his favorite pastimes: playing b-ball and listening to jazz. He said a one-day visit with his father helped him develop his love for both.

The jazz bit inspired this blog post, since I can’t even play H.O.R.S.E anymore without embarrassing myself.

Dee Dee Bridgewater’s live version of “Song for My Father”:

“Father” is a jaunty, bossa-nova-tinged classic that defined the career of hard-bop pianist Silver. This song and the album of the same name celebrated the Cape Verdean heritage of his father. Dee Dee Bridgewater took a swing at it with tribute album to Silver, Love & Peace, singing the best father praising lyrics I’ve ever heard.

“Color Him Father” – The Winstons