As a “bred and buttered” Dolly, bail bondsmen are no stranger to Ree (Jennifer Lawrence): In her meth-ravaged community, lab explosions and drug busts are commonplace.

However, the day when Sheriff Baskin (Garett Dillahunt of 4400 fame) darkens her front door, he delivers unexpected news that threatens to tear her family apart. Jessup, her meth-selling father (whose face is never seen except in a childhood picture), is on the lam and he used the family’s house and acres of lumber wood as collateral to post bail. If he isn’t found within a week’s time, the struggling family will be tossed out onto the street. 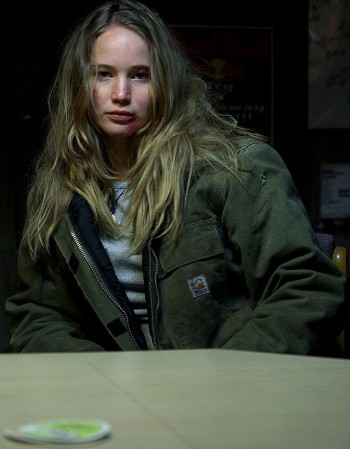 Ree (Jennifer Lawrence) sets out on a quest to find her father, in order to save her family’s house. (Roadside Attraction)

But Ree refuses to allow her young siblings and her depression-numbed mother to become homeless. So, she sets out on a perilous search to track down her father herself, which provides the back-bone of Debra Granik’ down-home noir.

The coldness among the people of Ree’s small town does not need the film’s ominous score: their menacing faces and volatile behavior – when “cranked out” or not – suffices.  Viewers will have a hard time forgetting Merab (Dale Dickey) the moment the camera zooms onto her face as she warns Ree to stop looking for trouble by asking around town about her father’s whereabouts. Or when Ree seeks help from her uncle Teardrop (John Hawkes) and the tense family reunion that occurs when she visits him. (In a later scene, Ree tells him, “I was always afraid of you”; His response with a slight grin: “That’s because you’re smart.”)

Despite further warnings and return visits by officers, Ree continues playing the detective while acting as a substitute mother to her vulnerable siblings. Her determination to not give up on both accounts shades light on future plans life has forced her to limit. Plans to join the army for quick money prove fruitless when the recruiter tells her that taking her siblings on the base during the combat would be impossible.

Crushed but not broken, she lets yet another dream die as her search reaches its climatic end – with a handy chainsaw in tow.